Want A Safe Home? Put A Big, Black Man In It.

ADT; the security corporation with a long history in the home security business has begun a new ad campaign featuring Ving Rhames as the spokesperson and effectively as the symbol of safety in our homes.

I; for one; am happy to see this particular development. I believe it is a positive sign when a big, burly, black man is placed in the position of representing home safety rather than the older stereotypical associations of large black men as a threat to our safety.

It isn’t the end all and be all of racial healing. It isn’t going to get anyone a better chance at an education or decent job by itself.

It is; I think; a sign. A sign that it has become; “Ok” to use a black man to be synonymous with white people being safe in their homes. Actually I am just a bit more excited about this than I let on. It’s a pretty big deal. It shows; better than anything I have seen yet that America’s attitudes are changing.

END_OF_DOCUMENT_TOKEN_TO_BE_REPLACED

At My Own Risk Is The Only Way I Roll

“Enter At Your Own Risk”.

That is the warning on the comments page of my new aquaintance;

Jueseppi B. – The Obamacrat

I posted my comment jokingly saying “At my own risk; that’s the only way I roll.”

But I got to thinking about that and it occured to me that rather than being just a joke; it’s the truth.

It is a sad truth; no doubt; but truth none the less in this country today.

After I read a statement Mr. B made on his page; I was moved to blatantly plagiarise his work; making changes and additions as I saw fit in order to present a similar statement about myself to you.

Cheeky, I know but hopefully not without some mitigation because it seemed so concise and poignient and so, me.

I have stated many of my beliefs and opinions on my site but I thought the time was right to make a clear statement of my position where President Obama is concerned and my politics in general.

A clear, concise picture of the Angryman and a reiteration of some of my strongest positions and beliefs.

So if you are intrigued or curious or just willing to listen to me again; click the button that says “Read my comment from theobamacrat”

END_OF_DOCUMENT_TOKEN_TO_BE_REPLACED

Sometimes Short Just Doesn’t Get The Job Done: A Treatise On Racism In America

The History and The Inspiration:

I began this article several months ago.

I never felt that it was ready for publication and one thing leading to another; it sat in my files untouched.

Today I was perusing my files and came upon it.

Trayvon Martin; they say; has made it Ok to talk about race in America again.

I hope that’s true because; Man have I got something to say.

Now God forbid you should think that I waited for anyone’s permission before publishing a piece on Racism.

But it does seem somehow………………………….tradgically prophetic(?) that I should have written; yet not finished this piece so soon before Trayvon’s horrible death and the subsequent outrage, and I believe, trauma experienced by America because of it.

This is because I perceive a change.

I hope I am not alone.

We have had many young black men gunned down in this country before; many, in the Southern States.

But never before have I such sensed the nationwide “Aura” of disgust, disapproval and…………almost a wishful disbelief; a hesitance to accept what we all suspected was the truth.

This sad and depressing thing happened and for the first time America; the vast multitude of Americans who are not inclined to verbally lash out as I am; was enveloped in a silence.

A dark brooding silence; uncomfortable and yet quietly hopeful that this young man had not been murdered because he was “Black”; “African American”

If I am wrong about this; feel free to let me know.

My only News comes from NPR but I usually find them pretty fair and balanced in their reporting.

If I am right; please let me know.

Either way; this article is done and I believe this needs to be said………………………

END_OF_DOCUMENT_TOKEN_TO_BE_REPLACED 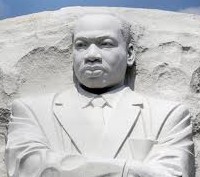 When I was young; my father said Martin Luther King was a Communist. He and my older brother often said that they thought he was instigating violence behind the scenes while preaching peace in public. I believed it because someone in authority; whose opinion I trusted said it was true.

When I was a child; MLK was leading the Civil Rights Movement. He was marching on Montgomery and Birmingham and he was Marching on Washington DC. Many thousands of people heard him speak and saw him stand up against the ill and unequal treatment that blacks received in our country; speaking to America about his dream.

But I believed he was an upstart. Someone who just wanted to tear this country apart because I was a child; I thought like a child; and I believed what I was told by a man who was forty-one when I was born.