Thanks to Eideard for this:

Posted by angrymanspeaks on November 2, 2015 in freedom of speech

“The Vietnam War was the longest deployment of U.S. forces in hostile

action in the history of the American republic. Although there is no formal declaration of war from which to date U.S. entry, President John F. Kennedy’s decision to send over 2,000 military advisers to South Vietnam in 1961 marked the beginning of twelve years of American military combat. U.S. unit combat began in 1965. The number of US. troops steadily increased until it reached a peak of 543,400 in April 1969. The total number of Americans who served in South Vietnam was 2.7 million.”

This is my President. I support him but this is one time I just don’t think I buy it. I will continue to support him because that is what we do in America; unless you are a $Republican$ of course. But then that isn’t the only reason to suspect the Republicans loyalty to America; $$$ END_OF_DOCUMENT_TOKEN_TO_BE_REPLACED

Posted by angrymanspeaks on October 31, 2015 in freedom of speech

How To Begin Again

The direction of the work has deviated from that specific course. It had to as I discovered other similar and dissimilar injustices all over the world. Injustices that span the entire vista of horrific things man can do to man and sometimes worse; the horrific things man can do to animals as well,  though it would take many more than just me to document all of the abuse animals experience and some of us would say it would be time and energy well expended to attempt such a task.

That is not my primary purpose though I support those who are sincerely trying to help and save animals.

Sometimes the work has stopped and I have felt it necessary to pick up and continue after a break of months. I’m not sure if this is the longest break but it has certainly been the most confusing one.

Before I could even think of beginning again, I knew I needed to stop; think; then decide where I am now.

There is a dream I have had that due to changes in my life, I wake up one day and I’m a right-wing Republican but so far each time I have re-evaluated my feelings and opinions of things, I find myself further and further to the left of my former position. I guess my night-mare is unlikely to happen but as I began life a Republican, I can’t help but pay constant attention. Crazy; Si?

END_OF_DOCUMENT_TOKEN_TO_BE_REPLACED

Posted by angrymanspeaks on October 25, 2015 in freedom of speech

#FreddieGray dies after cops severed 80 percent of his spine

Freddie Gray had to undergo a double surgery on three broken vertebrae and an injured voice box on Tuesday, after he was released by the police. He died today after days of remaining in a coma.

The 27-year old was arrested last week for an undisclosed violation. The police said that he was restrained on the ground by an officer during the arrest, but appeared to be fine when he was taken to the district station. However, a cell phone video shows that the arresting officers used force that some may seen as “brutal.”

Protests have broken out in his neighborhood since Gray was sent to the hospital.

“What happened to Freddie was unnecessary and uncalled for,” the Rev. Jamal Harrison Bryant of the Empowerment Temple said to protestors on Saturday. “All of those police officers involved need to be held accountable and answer for what they did, and need to be terminated from their positions,” he urged.

END_OF_DOCUMENT_TOKEN_TO_BE_REPLACED

I have heard of Tim Wise before but I never heard him speak before.

It’s an hour long video but well worth the time. Even those of us who believe we are against racism and have been speaking out can learn things from this documentary. Thanks to D and D for this oh so accurate look at ourselves and our nation.

An excellent documentary from the always on-point Mr. Tim Wise. It really gets to the heart of the matter regarding the cancer of racism, and how it has affected every segment of a mostly civilized society. Perhaps,this country will never become “post-racial”, but as Wise strongly suggests throughout this piece…the goal should be for it to become “post racist.” I couldn’t agree with him more as we witness the continued, unwelcome, demonic rise of Tea Party driven insanity that threatens to tear U.S. apart.~Daryl~

Posted by angrymanspeaks on April 19, 2015 in freedom of speech

Obama Is The “Antchrist” We’all Of Course He Is And Isn’t He Special? 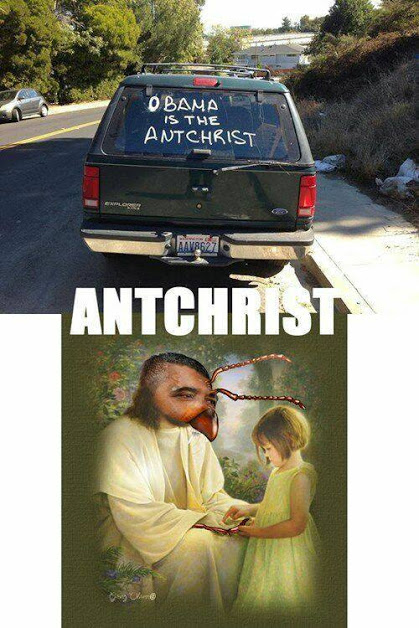 The other day, the electric meter for all of Germany ran backwards for 8 hours!

Thanks Eideard for the good news. The nation of Hitler and Goering has beaten us to self sufficiency. No offense to Germany but isn’t this just a little embarrassing for us?

Germany’s electricity traders may face busy weekends as sunny weather positions the nation for a season of solar power records.

After Wednesday’s all-time high of 27.7 gigawatts, Europe’s biggest electricity market is poised for new highs in the next few days or weeks, according to group meteorologist Marcus Boljahn at MeteoGroup. The previous record of 24.2 gigawatts was set on June 6, 2014, when fewer solar panels were installed, the weather forecaster said. One gigawatt is about equal to the capacity of a nuclear reactor…

Germany’s planned decade-long, 120 billion-euro ($127 billion) shift to cleaner energy from fossil fuels has made the nation the biggest economy in the world to rely so heavily on renewable power. Unpredictable solar and wind energy can flood the grid, resulting in negative power prices, when generators must pay consumers to take electricity. The risk is higher at weekends, when usage slows as offices and…

Posted by angrymanspeaks on April 18, 2015 in freedom, freedom of speech

the Hermit in the Hill Country